The inelastic route in the pressure vessel codes distinguishes between two types of analysis: limit analysis and plastic analysis. These are associated respectively with the limit load and plastic collapse load of a vessel. Normally, the term ‘collapse’ has various dramatic connotations, but in a structural engineering context simply means structural failure, whether dramatic or not. ‘Collapse’ and ‘failure’ will be more or less interchangeable terms in this article.

Although the more realistic representation of the material stress-strain curve implicit in a plastic analysis would give a more accurate collapse load prediction, this cannot easily be shown to be conservative. Conversely, limit analysis is more likely to give a conservative prediction. Whether an engineering analysis is, or needs to be conservative is always worth consideration and is likely to be more pertinent when attempting to simulate actual structural collapse.

The previous article moved from discussing analysis methods where predicted maximum stresses were assessed against predefined limiting values (usually the yield or tensile stress, or a factor thereof) to an introduction to methods that predict failure more directly. Most of that discussion was based on approaches used in the assessment of pressure vessels. However, the principles, which will be discussed further here, are suitable as a starting point to develop strategies for the modelling and prediction of structural failure in many other applications (providing it is compatible with relevant industry best practice and design codes).

The first-yield load can be defined as the load that causes yield to first occur in the structure. This is the value of load that many linear analyses aim to predict and at which such analyses are still accurate. In general, yield first occurs at one point, and although it is often pragmatic to take this as the maximum design load, it will not generally result in actual failure of a component. This is because, as the load increases beyond this and the plastic region grows, the surrounding elastic material restrains the structure as a whole from any dramatic increase in deformation. The limit load has been defined previously: it is a theoretical load that would cause structural failure, assuming the material is perfectly plastic. This being the case, as the load approaches the limit load, the elastic regions shrink such that, at the limit load, they have become too small to restrain the plastic region from growing, or have disappeared altogether. The plastic region can then grow without restraint and failure will result. (Since any entirely plastic region in such a material has zero stiffness, it cannot contribute to sustaining or reacting any increase in load, without increasing in size. So load increases are sustained by the structure through a combination of growth of the plastic regions and increased stresses in the remaining elastic regions of the structure.)

The limit load is obtained from a limit analysis and loads larger than this cannot be sustained by a (theoretical) structure with a perfectly plastic material. But a higher load, termed the plastic collapse load, can often be sustained by a plastic analysis of the same structure, which, as mentioned in the previous article, includes a more realistic representation of the material stress-strain relationship in having a positive stiffness for the post-yield portion. This is sometimes referred to as a strain-hardening material model (see diagram). Plastic analysis can also include large-displacement (non-linear geometry) effects. (Because of the non-zero post-yield stiffness, a plastic analysis allows an entirely plastic region to sustain some of the increase in post-yield load. This is in contrast to a limit analysis and is why the plastic collapse load is higher than the limit load.) As with a limit load prediction, the plastic collapse load would be seen as the highest convergent load increment in a well-configured finite element analysis. 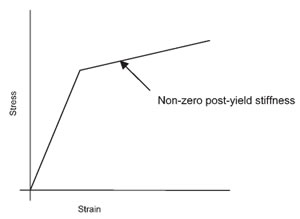 It was stated that limit analysis is usually conservative; the cases in which it is not are those in which buckling can occur (more formally known as structural instability). A plastic instability load is sometimes defined, and failure, in this case, is often associated with large changes of overall shape, centred on compressive regions of the structure. These can normally be captured by the large displacement theory embodied in a plastic analysis but will not be captured by a limit analysis. So in these cases, the plastic collapse load will be the same as the plastic instability load, which will be smaller than the limit load, and a limit analysis should not be used to predict collapse.