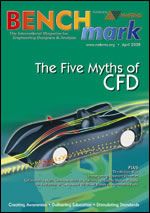 When I visited Germany in March, the DACH Steering Committeewere discussing the seminar that they were about to hold on "Simulation Driven Design". This is a "catchphrase" that is often rolled out. It has certainly received a lot of attention during the NAFEMS led Autosim project, and a number of our regional groups have held seminars on the subject.

But what exactly does the phrase mean? Well, for most of us, I suspect that we would interpret it as doing some simulation early enough in the design cycle (possibly at the concept stage) that the results can truly influence the basic fundamentals of a product design. It so happened that some of the presenters at the German seminar had chosen to focus on the use of CAD embedded software by designers – a subject which has provoked much debate within NAFEMS circles, and something which may or may not be a part of a simulation driven design process.

There are many ways of implementing a simulation driven design policy. Whilst discussing their forthcoming seminar on "Upfront CFD", the Computational Fluid Dynamics working group has talked about different approaches, including the fact that major aero-engine companies are already carrying out simulation driven design, based on CFD results, and have been doing so for some time: the design of their engines involves the use of CFD analysis from the very outset, carried out by expert analysts, even before any geometry has been defined.

And this brings out another point – if simulation is to drive the design, it is quite likely there will be no geometry defined, and hence no CAD model. Which leads to further questions, such as: Should the early stage simulation be based on CAD geometry, and if so, who creates it, and who has the right to modify it? Or should this type of simulation be based on a simplified, or symbolic, representation? Do we need a new generation of software tools to support this?

I imagine that most of us don’t need too much help in being reminded of the advantages of simulation driven design- the most obvious being the old adage of cost savings resulting from making design changes early on, whilst changes are cheap, and saving problems later on. It is also a further step along the way towards achieving the vision of simulation being a tool which is readily available and used by all engineers, to see the effect of their design changes in real time, as they make modifications. But this inevitably leads some of us to the same old obstacles: what of the dangers of simulation being used by engineers who have little knowledge or training in the subject? Do we need a new generation of software tools to be developed to cater for this? Or should we focus instead on ensuring that all engineers and designers have some basic training on simulation?

At the end of the day, I believe that this all comes down to a question of the maturity of the technology. At some stage, industry will surely fully embrace the true concept of simulation driven design. But when this will happen, and how, are still somewhat open questions. Ultimately, each individual organisation, and industry at large, will make its own judgement, but all of us have a major role to play in informing and influencing that decision.