Simplification of FE-Crash-Models for Optimization of Vehicle Structures 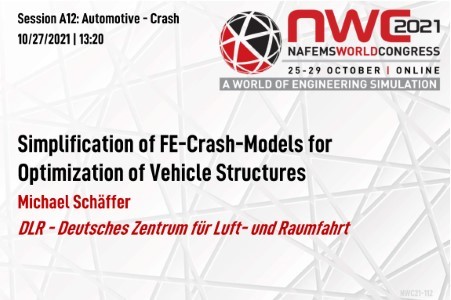 New simplification strategies for crash simulations are developed at the German Aerospace Center (DLR) as part of the Next Generation Car META-project. The computational costs required for the various crash load cases are challenging for optimization of vehicle structures. In this paper an automated model generation for simplified vehicle crash models is presented by using global deformation characteristics of structures which are obtained from the global crash model. Due to the obtained reduction of computational costs, structural crash optimizations can be performed. The development of a light and crash safe body-in-white structure is currently supported by lots of crash simulations. As part of these developments the increased application of virtual methods the product development process has been more than halved leading to shorter product life cycles. [1], [2] However, due to the high computational costs required for crash simulations, structural optimizations cannot be carried out with a full vehicle model. Therefore, there is a strong need for an automated generation of simplified vehicle crash models to include structural optimizations into the shorted product development process. For reduction of computational time, an automated four-step approach for the generation of a simplified vehicle model was developed in [3] and [4]. For the verification of the automated approach, crash simulations were carried out investigating the US NCAP (100%, 56 km/h) crash load case. In this load case, the vehicle is driven against a rigid wall at a speed of 56 km/h. The crash model of the Toyota Yaris [5] was taken, since the available crash model is validated for this crash load case. In comparing the global deformation of the simplified vehicle model and full vehicle model no major differences can be identified. Besides, the same overall crash kinematics between the models, also the same buckling and folding of the bonnet, deformation of the exhaust system and deformation to the chassis is obtained for the two models. The main target of simplified crash models is the reduction of computational time with a minimum influence on the simulation results. For the assessment of the time reduction potentials, all crash simulations were performed on the same CASE-2 Cluster on 24 CPUs. Through the application of the modelling approach, the number of components in the model could be reduced by 50%, and the computational time can be reduced by approximately 65% in this load case. REFERENCES [1] Duddeck, F.: Multidisciplinary optimization of car bodies. https://doi. org/10.1007/s00158- 007-0130-6; Struct. Multidisc. Optim. 35, 375–389, 2008. [2] Klaiber, M.: Use of Innovative 3D Printing Technologies for Flexible Process Chaining, 2. Technologietag Hybrider Leichtbau, Stuttgart, 2015. [3] Schäffer M, et. al, Methodological approach for reducing computational costs of vehicle frontal crashworthiness analysis by using simplified structural modelling; https://doi.org/ 10.1080/13588265.2017.1389631; International journal of Crashworthiness, 2017. [4] Schäffer M, et. al, Automated generation of physical surrogate vehicle models for crash optimization; https://doi.org/10.1007/s10999-018-9407-8; Int J Mech Mater Des, 15, 43-60, 2019. [5] NCAC, „Extended Validation of the Finite Element Model for the 2010 Toyota Yaris Passenger Sedan“. The George Washington University, 2012.