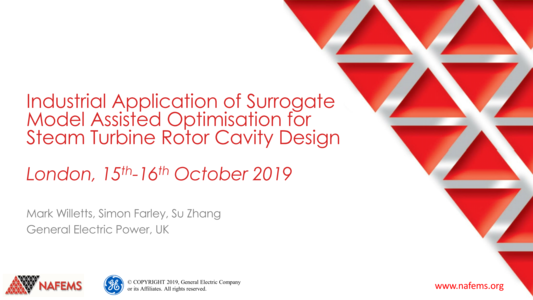 This presentation was made at the NAFEMS European Conference on Simulation-Based Optimisation held on the 15th of October in London.

Optimisation has become a key ingredient in many engineering disciplines and has experienced rapid growth in recent years due to innovations in optimisation algorithms and techniques, coupled with developments in computer hardware and software capabilities. The growing popularity of optimisation in engineering applications is driven by ever-increasing competition pressure, where optimised products and processes can offer improved performance and cost-effectiveness which would not be possible using traditional design approaches. However, there are still many hurdles to be overcome before optimisation is used routinely for engineering applications.

The NAFEMS European Conference on Simulation-Based Optimisation brings together practitioners and academics from all relevant disciplines to share their knowledge and experience, and discuss problems and challenges, in order to facilitate further improvements in optimisation techniques.

Steam turbine rotor design is a complex iterative process that often involves an engineer manually having to modify the design and analyse each concept until all of the design criteria are met. APOW, a GE in-house software tool, allows simulation processes such as this to be captured as a workflow within a graphical user environment and then executed automatically, either as a single calculation or as an iterative set of calculations, using one of the built-in methods for Design of Experiments, Optimisation or Uncertainty Quantification. However, the time taken to perform each iteration of the process often prohibits a fully automated design optimisation. In cases such as this, surrogate model assisted optimisation can be employed to reach the same goal in much shorter timescales, making automated design optimisation a reality for industrial applications.

Previous analysis of this steam turbine rotor under steady state conditions has shown that the main stress concentrations are located in the central cavity. It was found that by increasing the mass of the forging, the von Mises stress in the cavity could be reduced, but this comes at expense of higher hoop stress at the centreline. In this study, the shape of the central cavity has been optimised to reduce the rotor volume and the maximum Utilization Factors, functions of stress and temperature, in the central cavity (based on von Mises stress) and centreline (based on hoop stress). Four input parameters were added to the Catia V5 CAD model to define the shape of the central cavity. A template Finite Element simulation was then created based on this CAD model using ANSYS Workbench, which included steps to extract the stresses and temperatures around the central cavity and along the centreline. Finally, a python script was written to calculate the maximum Utilization Factors for both the central cavity and the centreline of the rotor. APOW was then used to connect each of these component steps together to form a single workflow for automation.

The optimisation was approached in four stages, starting with the creation of a five-hundred-point Design of Experiments (DOE), using the Optimal Latin Hypercube method in APOW. FE simulation results were obtained for each point in the DOE using the APOW workflow. Using this information, it was then possible to generate surrogate models for each of the output variables, namely, volume, maximum displacement and the maximum Utilization Factors for the central cavity and centreline. APOW offers the ability to display these surrogate models in three-dimensional space and provides a range of quality indicators for accessing the models prior to use. Next, a second workflow was constructed in APOW connecting the surrogate models together and a multi-objective optimisation was performed using the NSGAII algorithm. As a final step, APOW was used to identify a suitable solution from a Pareto front constructed using the optimisation results and then these parameter settings were then fed back into the original workflow to obtain a FE simulation and thus, verify the solution from the surrogate models.

To have manually optimised this part would have typically taken several days of an engineer’s time to perform the necessary design iterations. This study has demonstrated that by using an automated optimisation a much larger design space can be explored which has allowed further improvements to be identified on an already optimised design. However, to have carried out the automated optimisation using the workflow containing the full simulation process would have still taken several weeks to process. By using surrogate models in place of the full simulation, this study has demonstrated how the calculation time can be reduced from weeks to just a few days, whilst still improving on the design. Another important factor in this study, is that the time taken to perform the optimisation is now only compute time, whereas with the manual process this would have predominantly been an engineer’s time.