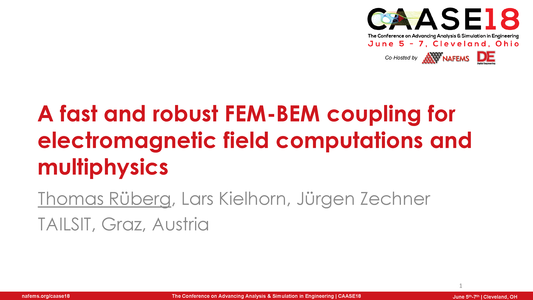 Numerical simulation forms an indispensable part of the development cycles of electric machines, magnetic sensors, or transformers---and Finite Element Analysis (FEA) has become the de facto standard for the virtual prototyping of such devices. Whereas FEA seems perfectly suited for, among others, structural analysis problems, the simulation of electromagnetic field problems still poses significant challenges. Since these fields penetrate not only the objects under consideration but also the surrounding space, the FEA requires also a discretisation of a substantial amount of exterior volume. This approach, although common in most commercial FEA software packages, generates several problems:

-- The volume discretisation of the surrounding space can only be bounded and therefore requires the creation of artificial boundaries with unknown conditions. This modelling error can affect significantly the accuracy of the simulation. Especially, force and torque calculations in electro-mechanical coupling suffer from this shortcoming.

-- Frequently, devices in electromagnetic field simulation consist of moving parts. If components move relative to each other, standard finite element meshes get distorted, often to the extent of rendering the approach useless. Many techniques exist to circumvent this issue, such as sliding grids, but each of which comes at a cost and has its own restrictions.

In this work, we present an approach based on the coupling of Finite Element and Boundary Element Methods (BEM) that resolves the above listed issues. The BEM allows for a highly accurate approximation of the electromagnetic phenomena in the exterior space and solely requires a surface discretisation. Consequently, any discretisation of the surrounding space and related artificial boundaries are completely avoided. More specifically, we use a symmetric finite element-boundary element coupling for magnetostatic and eddy-current problems. This formulation has proven to be robust with respect to large jumps in the material parameters. Moreover, our approach exhibits almost linear complexity due to:

-- An optimal preconditioning strategy for the finite element and boundary element system matrices.

-- The use of a Fast Multipole Method that reduces the quadratic complexity inherent to a standard BEM down to linear complexity.

We demonstrate the validity of our implementation by addressing several benchmark examples for magnetostatic and eddy-current problems. Moreover, the analysis of a eddy-current brake and induction heating are presented in order to substantiate the versatility of the method.