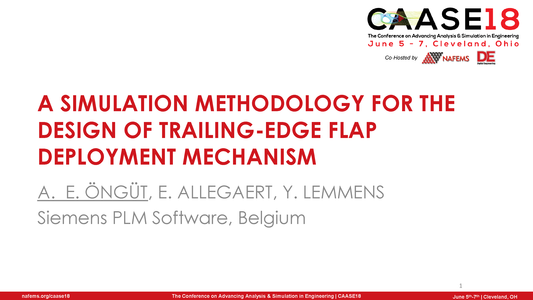 In the framework of the European research project Clean Sky 2 GRA-Airgreen2 [1], a simulation methodology for the design of trailing-edge flap deployment mechanism has been developed. The methodology is composed of software tools for linear and nonlinear flexible multibody simulation, structural analysis and parameter optimization. First, multibody simulations of the conceptual deployment mechanism for various load scenarios are performed. After the component loads are determined and reviewed by the user, a parametric optimization of component dimensions is performed. Finally the optimized parts are assembled into a multibody analysis with nonlinear structural components for the final verification of loads and ultimate structural limits. The data transfer between the different analysis tools have been streamlined such that design iterations can be performed in an efficient manner. The methodology is applicable to various mechanisms in many industries such as aerospace and automotive.

The design of complicated engineering mechanisms poses a challenge to the engineers and generally requires many iterations until the final design is obtained. In order to automatize and streamline this procedure and address different design challenges, a design methodology has been developed that comprises various mechanical design and simulation software.

As mechanisms encountered in engineering applications are composed of multiple interacting components with joints, forces, contacts and similar other constraints between them, multibody simulation is crucial to determine the loads acting on every component. With the help of Simcenter Motion, it is possible to create a flexible multibody model and simulate it for various load scenarios. After the multibody simulations are performed for different load scenarios, a python script is used to extract the information from the result files and write to a spreadsheet for each component, so that the user can review the critical load cases for every part and choose the most critical ones as necessary.

After the critical load scenarios are determined, component sizing analyses were undertaken using the optimization software HEEDS together with Simcenter and NX Nastran linear structural solver in order to minimize the mass of every component while satisfying the structural safety factors. The sizing analyses were performed for the tracks, links and carriages of the deployment mechanism.

As the final step, the optimized geometries are assembled back for the verification of design loads and ultimate structural limits. For this purpose the nonlinear multibody solver (NX Nastran SOL 402) in Simcenter is used. Since the nonlinear multibody solver combines the kinematic joints and constraints with the nonlinear structural model, it is possible to determine the component loads and plastic deformation of the structure at the same time for the critical loads scenarios and verify that the ultimate structural limits are not exceeded.

As part of the European research project Clean Sky 2 GRA-Airgreen2, a simulation methodology for the design of a trailing-edge flap deployment mechanism has been established. The methodology enables a semi-automatic design process that includes the identification of the component interface loads, sizing of the components within an optimization loop and non-linear validation analyses. The methodology can be used in combination with architecture-based synthesis [2] to efficiently analyze and compare many different design configurations. Furthermore, the described simulation methodology can be adapted and applied to various mechanisms in other industries.