Computational Analysis of Components Produced by Fused Deposition Modeling, and the Importance of Print Orientation 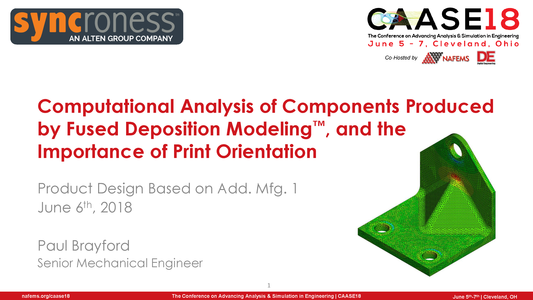 In the whitepaper this presentation will be based on, we examine the nature of material properties in FDM components and the difficulties in applying rigorous analysis. We also construct a demonstrative component to examine the comparative effects of the manufacturing build orientation variable on mechanical response.

Given the observation that infill bond strength plays a significant role in the bulk tensile strength of printed components, we theorize that there is additional material behavior that the direct application of ASTM D638 does not capture. For this discussion, we assume a component with a simple rectangular layer. If we print a rectangular block using rectangular layers that have the same width as the XZ samples, we would expect it to behave with the same properties as the XZ data when loaded in the same tensile direction as the samples. Similarly, we would expect a block printed with layers as wide as the XY samples to follow the response of the XY data. However, given that the percentage of infill is the primary contributor to the variance of as-printed material properties, if we print a rectangular block with rectangular layers that have a width between the XZ and XY samples, we know that the infill percentage will be between 50% and 88% as driven by the block width, and that the material properties of this in-between layer width should fall between the XZ and XY data.

It follows that as the layer width is only defined by component geometry, and can be anything from a single nozzle diameter up to the maximum dimension the printer can produce, there exist differing material property datasets below, in-between, and above, the captured XY and XZ data. We assert that the material data collected from the XY and XZ samples represent only two discrete points along a continuous curve; layer width vs. material performance. This curve describes a material that is geometry-dependent anisotropic, with material properties that vary not only with the direction the load is applied but also with the size of the feature that the load is applied to. Thorough characterization of such a material would be difficult but could theoretically produce a curve for each varying material property against layer width.

For simulation comparisons, this study focused on three build orientations, based on which side of the part was parallel to the print bed. Provided the use of support material to allow high-angle overhangs is acceptable, it is possible to print the part in any orientation within the build volume of an FDM printer. If we assume that one of the flat sides of the component must lie on the print bed, we could rotate the component about the vertical axis and generate a curve relating the angle of rotation to the minimum FOS. The maximum point on this curve would indicate the most advantageous rotation angle at which to print the component, potentially further improving the minimum FOS in loading. Theoretically, this approach could be extended to multiple orientations and curves if there are a few sides of the component particularly suited to be aligned with the print bed, or out to any orientation if the part does not have any obvious side to place on the print bed. While it might be possible to manually iterate or use an iterative simulation tool such as SolidWorks Optimization for a known set of orientations and rotation axes, more advanced software with robust optimization algorithms would be required to optimally place a component at any orientation in the build volume.