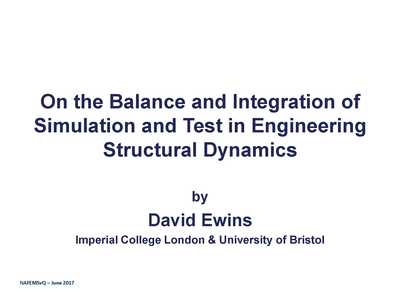 This presentation by David Ewins was made at the 2017 NAFEMS World Congress in Stockhom Sweden.

Thirty or so years ago, the rapid growth in computational capabilities, both hardware and software, promised a future where reliance on relatively slow empirical methods of design and development would be replaced by much more timely predictive simulation methods, In particular, designs would be well advanced before any material was cut.  Analysis (or simulation) would replace Tests. NAFEMS was established to help guide the correct and effective ways of building on the computer revolution.  At just the same time, the first post-war generation of environmental test engineers, who had paved the way for modern testing by embracing electronics in the 1960s and, subsequently, microcomputers in almost every level of experimental activity, were approaching retirement.  The risk of losing a whole generation of practical expertise was identified and an organisation – the Dynamic Testing Agency (DTA) - was established with the specific remit of documenting that expertise.  The DTA collaborated with NAFEMS throughout the 1990s as a result of their shared strategic objectives and, eventually, was absorbed into NAFEMS as the Dynamics and Testing Working Group of today.

This lecture is based on first-hand involvement in the whole 30 years’ activities which are embodied in this Working Group.  Today, Tests have not been replaced by Simulation.  They play complementary and often matching roles in the development of advanced structures, machines and vehicles.  One reason for the delayed demise of Testing is the change of expectations that often accompanies advances such as we have experienced with FE methods.  Another reason is the almost inevitable persistence of uncertainties in analysis, brought about by the need to simplify and select in pursuit of cost-effectiveness.  A third reason is the inevitability that the final verification of any product can only be achieved through physical testing.  As a result, testing and simulation will be essential and matching partners in most engineering product designs, especially those of the more complex, critical and application sectors.

The lecture presents the case for achieving an optimum balance between, and integration of,  Test and Simulation in modern Vibration Engineering. Vibration in structures, machines and vehicles remains one of the major performance-limiting features, particularly so for the critical applications in the advanced aerospace, defence and power industries.  As a result, designers of such engineering products demand techniques which enable them to eliminate or control any undesirable behaviour such as excessive vibration, and to do so at the design stage.  Increasingly, they turn to computer models to provide such a capability and at the same time raise their expectations of just how much can be done to remove vibration from the list of concerns.  From a different perspective, customers and regulatory authorities expect evidence that the products they are being delivered will, indeed, be free from all the side effects that are associated with vibration.  This means that tests must be done to provide such evidence and, here again, expectations and demands are raised in this process.

Modern structural dynamics provides the technology required to meet these demands.  It comprises three main skills – theoretical modelling, numerical analysis and experimental measurement - and the overarching theme of this lecture is the need for these three basic tools to be balanced and integrated.  In effect, this means that as simulation techniques (modelling plus computation) improve - often dramatically because of great strides in computation - it is necessary for experimental techniques to keep step, not least because the final stage in any product is the pass-off or certification test.   In practice, and especially for the critical structures of advanced high-performance machinery, vehicles and plant, the ideal simulation-test integration comes when tests can complement and inform modelling activities and, equally, when advanced models can inform the design and conduct of the expensive pass-off tests.  In both of these major endeavours - (i) constructing a model that can be used with confidence to be used to design, and (ii) carrying out tests which convincingly demonstrate the predicted functionality across the operating spectrum - the underlying concern is to reduce uncertainties to an acceptable level.  This, in turn, means ensuring that the levels of vibration experienced in service are such that the structural performance meets its designed levels of life, reliability and disturbance.

The lecture will emphasise how today’s state-of-the-art structural dynamics needs to be focussed on the ‘bottom line’ in all vibration problems encountered in practice: managing vibration response levels across the structure and throughout its service life in order to satisfy the structural performance demands as well as those of functional performance.