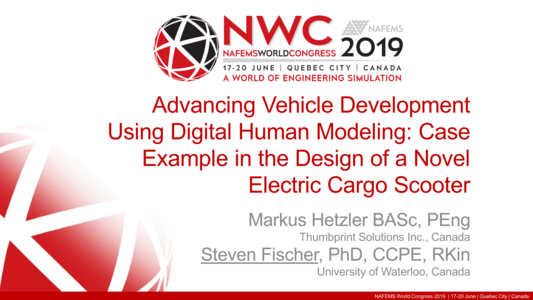 Background: The success of any design often hinges on end users’ perspectives related to fit, form and function; the “voice of the customer”. Within a product design process, the voice of the customer often relies on their interactions with physical prototypes. Evaluating the fit, form and function, also known as the Human Factors / Ergonomics (HFE) is essential to drive further refinement and development of the design. However, building physical prototypes and conducting human testing is time intensive and costly, can be subjective in nature, and generates interpretation and inference that can often obscure conclusions. Digital human models (DHMs) have long tried to fill that gap by evaluating HFE considerations (also known as human-in-the-loop) earlier within Computer Aided Engineering (CAE) processes. Yet, integration of DHMs into the CAE process has only had modest effect. The problem is that most DHMs operate as virtual mannequins. Virtual mannequins have joints that must be manually manipulated (postured) into poses so that they appear to perform recognizable human activity. Doing that within a CAE process can be tedious, time-consuming, and remains highly subjective, particularly because posturing must be repeated to evaluate every prospective design change, almost eliminating the potential for trade-off analysis and design optimization. However, recent advances in task-focused human behaviour prediction overcome many limitations of classical virtual mannequin manipulation. A predictive human model can identify prospective HFE problems during early design (like classic virtual mannequins), but more importantly, can be used to perform product-specific task-focused trade-off analyses. Trade-off analyses permit users to explore the impact of a wide range of possible design changes on HFE considerations, without constant re-posturing, without waiting for updated CAD, or without resorting to costly physical prototypes and extensive, subjective, human testing.

Objective: To deploy a task-focused human behaviour prediction model to simulate and evaluate HFE considerations during the operation of a prospective electric cargo scooter design. This case example investigated scooter ingress and scooter operation from the seated riding position. Our goal was to evaluate a baseline design, and subsequently “design-on-the-fly” as necessary to yield optimal fit, form and function for end-users.

Methodology: Baseline CAD of the new cargo scooter was imported into Santos® Pro software (SantosHuman Inc.). Avatars representing a 5th percentile female rider and a 95th percentile male rider were imported from the existing Santos® Pro avatar library. Each model was then configured to adjust the performance measure requirements and to define the task relevant design constraints used to drive the multi-optimization-based task-focused human behaviour predictions (e.g., “find a seated riding posture that minimizes joint displacement such that the hands must grip the handle bars …”). Results were used to evaluate HFE considerations with the current design. Where HFE issues were identified trade-off analyses were completed to inform design changes necessary to optimize fit, form and function.

Outcomes: By applying a task-focused human behaviour prediction model at the earliest stages of design, as opposed to traditional CAD manikin positioning, we identified important HFE issues that may not have otherwise been detected until physical prototyping. As one example, the simulation identified that a 95th percentile male could adopt an ingress strategy that promoted a more neutral posture if the spacing between the steering column and seat was increased by 50mm. Leveraging the predictive power of the model, we then evaluated and address knock-on effects to seat height, floor board design and steering bar location in a manner consistent with optimized human performance. The analysis allowed us to fundamentally re-work the vehicle architecture and design out HFE issues early in the design process, saving a full round physical prototyping and human testing.