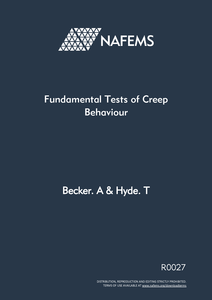 This report presents a set of benchmark tests, designed to test the ability of finite element codes to follow the constitutive equations of creep. The objective of the report is to provide background and tests for fundamental creep behaviour in geometrically trivial problems, similar to the previously reported elastoplasticity benchmarks.

The tests are confined to standard power-law creep equations, of the type usually used for metals that are capable of modelling secondary and primary creep behaviour which should be available in most current finite elements codes. A test involving a combined primary-secondary creep law is also included. All the benchmarks presented in this report are geometrically trivial, and include plane stress, plane strain, three-dimensional and axisymmetric situations. Constant applied loads and displacements, as well as step changes in the applied loads are included to demonstrate time and strain hardening effects. Reference analytical and/or numerical solutions are shown for all the benchmarks.

BACKGROUND TO THE BENCHMARKS