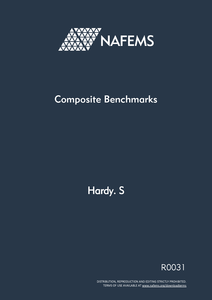 The use of Benchmark problems as part of the process of program evaluation is well established and NAFEMS have a number of reports giving details of suitable static, dynamic, non-linear and thermal problems. [2-7]. These problems assume isotropic linear and non-linear material properties and the targets are not applicable when composite test problems were undertaken and these were considered to be suitable for further development into Benchmarks.

This report describes three benchmark tests which are designed to evaluate the performance of a finite element system when used to predict the structural behaviour of composite finite element analysis. The three tests are:

A brief description of each test, including details of the target solutions, is given in Section 2. Where necessary, reference is made to the Appendices for any relevant theory.

The Benchmark tests themselves are presented, in the standard NAFEMS form, in Section 3.

APPENDIX A: Equations for a Compound Beam

APPENDIX B: Equations for a Compound Cylinder (Orthotropic.Isotropic)