An Introduction to Modelling Buckling and Collapse 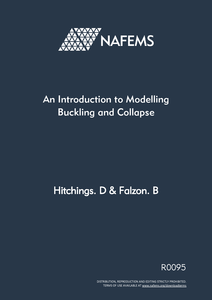 The term ‘collapse’ is often used to refer to the sudden loss of structural integrity and does not distinguish between the two major categories leading to structural failure: (a) material failure or (b) structural instability due to loss of structural stiffness within the elastic limit of the material. The term ‘buckling’ is often reserved specifically for the latter category. At an elementary level, predicting material failure may be accomplished using linear finite element analysis. The strains and corresponding stresses obtained from this analysis may be compared to design stress (or strain) allowables anywhere within the structure. If the finite element solution indicates regions where these allowables are exceeded, it is assumed that material failure has occurred. Design allowables are based on experimentally-derived material strengths and usually include a safety margin. This type of analysis will give an adequate prediction for statically determinate metallic structures undergoing small deformations.

If the structure is statically indeterminate, as indeed the majority of practical structures are, the analyst may want to assess the evolution of material failure. The load at which material failure initiates may be significantly lower than that which leads to eventual collapse. The analyst may also want to know the nature of this failure progression, that is, is it gradual or does it occur rapidly? Material failure may be the result of plasticity in metallic structures or fracture, which is a more prevalent form of failure in brittle materials such as ceramics or carbon-fibre reinforced plastics.

The structure may also undergo large deformations before or during material failure and it is therefore apparent that the presence of geometric and material non-linearities requires more sophisticated finite element solution schemes.

Buckling refers to the loss of stability of a structure and in its simplest form, is independent of material strength where it is assumed that this loss of stability occurs within the elastic range of the material. It is primarily characterised by a loss of structural stiffness and cannot be modelled using basic linear finite element analysis.

Slender or thin-walled structures under compressive loading are susceptible to buckling. Buckling may also be stable or unstable and different geometries lead to different forms of buckling stability. A distinction is also made between classical buckling and other forms of structural instability. Without resorting to formal definitions and distinctions at this stage, one physical manifestation of these differences is that classical buckling results in the structure deforming primarily in a direction orthogonal to that of the applied loading causing this instability.

Another form of structural instability, termed snap buckling, is where the deformation is primarily in the direction of the applied loading.

Material failure and buckling may both occur in sequence leading to structural collapse. A thin-walled or slender structure may initially buckle elastically but the resulting high deformations may cause localised material failure. A thicker-walled or less slender structure under high compressive loading may exhibit localised inelastic behaviour, such as plasticity, which lowers the stiffness leading to buckling.

This book provides an introduction to the various mechanisms which may lead to structural buckling or collapse and the strategies employed in modelling this behaviour using finite element analysis. While the use of some jargon is unavoidable, every effort has been made to ensure that definitions are given when required, either within the text or as an entry in the Glossary at the end of this book. It is also the authors’ view that the introduction of mathematical equations is central to giving the analyst further insight into the suitability of the various numerical strategies available in most finite element systems. If the reader is particularly averse to the mathematical treatment given herein, he or she may skip over these and still obtain useful and practical information on modelling buckling and collapsing structures.

The development of new finite element methodologies and formulations, to model highly non-linear behaviour such as buckling and collapse, continues to advance at a rapid pace. The majority of the methodologies and modelling strategies presented in this book may be found in current commercial finite element packages. To give this book relevance beyond the immediate time, recent developments which are still at the research stage are also discussed. While these may not be available commercially at the time of writing, there is enough information given for the interested reader to implement these schemes in non-commercial (research) codes or, if possible, as user subroutines in commercial finite element packages.

2. A Brief Overview of Elastic Stability

3.4. Methods for Finding Eigenvalues and Eigenvectors

5.5. Other Forms of Explicit/Implicit Solution Methods

5.12. Example 5B – Postbuckling Response of a Cantilever Beam

6.4.2. The Second Theorem of Limit Analysis

7. Collapse due to Fracture