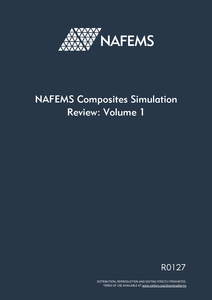 The NAFEMS Composites Working Group (CWG) is the focal point for NAFEMS activities relating to composite materials. The CWG joined other previously established NAFEMS technical groups in 2010 in response to the high level of activity by members using numerical methods in the analysis of composite materials.

One of the core goals of the CWG is to create awareness and education of composites simulation capabilities and needs. NAFEMS, as a world-wide organization, has multiple information sharing activities throughout the year including various conferences, courses, webinars, seminars, workshops, and the Benchmark magazine. Aspects of composites simulation have long been a part of these events and there have been numerous articles appearing in the Benchmark magazine. To this point, however, there has not been a NAFEMS publication dedicated to collecting articles relating to composites simulation in one easy-to-access volume for the membership. This curated collection of papers and articles is intended to address this need.

The CWG identified previously published papers and articles from past NAFEMS events and Benchmark magazine and selected 22 to be brought forward in this volume. For this edition of NAFEMS Composites Simulation Review, these articles have been drawn from:

• Benchmark magazine, published quarterly by NAFEMS, with articles and news from all areas of engineering simulation, worldwide.

The selected articles address a range of topics in composites simulation, including design, failure, mechanics, and process-chain. These articles may have a focus on applications in the aerospace or automotive industries but provide insight for any scientists or engineers simulating composites in any sector. These articles have been selected from a period of time roughly between 2013 and 2015.