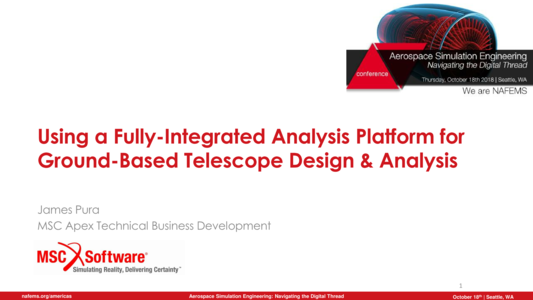 This presentation was made at NAFEMS Americas 2018 Seminar, "Aerospace Simulation Engineering - Navigating the Digital Thread".

Aerospace manufacturers and suppliers are facing an increasingly challenging and competitive marketplace as their products are becoming more complex via tighter integration of systems and cyber-physical environments. That being said, there are rising interests to incorporate Digital Threads as communication frameworks for sharing product lifecycle information seamlessly and Digital Twin methodologies for assessing virtually the expected and future operational physics-based capabilities of a product throughout its lifecycle. Utilizing these techniques in conjunction with the latest engineering simulation tools effectively, accurately and efficiently to meet business goals has never been more critical, as aerospace engineering continues to move into a highly-advanced technological space.

Where did our universe come from? Since the beginning of time, astronomers and physicists such as Galileo, Copernicus, and Einstein have dedicated their life’s work to this timeless question. Even today, investigating the universe’s origins remains hotly debated. To help answer this, the team at the Giant Magellan Telescope is building a 200 foot-high telescope that will help scientists uncover what has plagued scientists and science fiction enthusiasts alike:

Are we alone? How did the first galaxies form? What is the fate of the universe?

The GMT is uniquely poised to answer these questions due to its ability to collect more light than other telescopes and to its’ uniquely high resolution (which will be the highest ever achieved in a telescope). The project is sponsored by Astronomy Australia Limited, Carnegie Observatories, Harvard University, and other leading universities and research institutions from around the globe. Due to the complexity of the structure, placement of mirrors, and movements that will occur during operation of the telescope, the engineering team at GMTO used MSC Software’s simulation tool, MSC Apex, to simplify and shorten their design and simulation workflow.