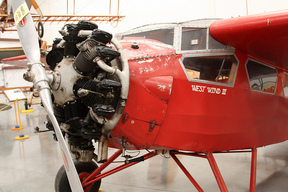 Every Saturday when I am in town I work as a part time volunteer at Yank’s Air Museum in Chino, California. If you are in the area please come and check it out, it is rather special. If I am there don’t forget to say hello.

One of the museum aircraft has always intrigued me because of the photo blow-up set on an easel next to it. The aircraft is a Cessna A model, the first aircraft built and flown by Cessna as an independent company. It is a high wing monoplane with very sleek lines for 1928. Clyde Cessna, the founder of the company designed it, and believed in the advantages of the monoplane - much less drag and the opportunity to develop a very efficient wing structure. However the majority of the aircraft industry, the military and certainly the public, were very mistrustful of the monoplane. Rugged biplanes with plenty of struts and bracing wires looked safer and were the standard of the time.

Clyde Cessna was an innovator, and it seems, a shrewd businessman. He needed to convince the public that his planes were as strong as the biplanes. The photo on view in the museum shows his determination to prove his point. A Cessna A model sits on the Kansas plains, under a dramatic sky. Standing along the top of the wing, looking very proud and equally determined are half the design office! There are eighteen people in this photo, and there are other photos with even more.

Admittedly the average person was a bit lighter then, but any member of the public looking at that picture would get an immediate impression of strength and would be a lot happier about flying in it.

I often wonder how many visitors to the museum today take a look and also agree it is a robust plane. However, hopefully, all the engineers passing through look at the picture and recognise the neat PR job Clyde had pulled off. Aircraft wing lift is, of course, an up load. The Cessna staff are providing a down load, not actually much use in convincing us of strength in normal flight. Clyde knew this of course and there are other fascinating pictures of sandbagged inverted wings used to check loading conditions.

I did a quick hand calculation and estimated that the staff were putting about -1.3g equivalent loading on at maximum all up weight. That equates to a manoeuvre of about -0.3g, just a bit more up load than free floating. A really savage gust might get you there, or a very abrupt stick forward movement.

The links to FEA in this tale are quite direct – in all the rush to get the analysis model right it is very easy to forget something as basic as loading direction, or loading sense. I have embarrassed myself and pushed rather than pulled on many occasions. I have inflated submarines and squeezed aircraft fuselages! I have also launched impact analysis for overnight runs and come back in the morning to find pristine containers happily sailing away from the target. Sometimes loading actions can be surprisingly subtle and need thinking through carefully.

So next time you do that final once over check prior to analysis - think of Clyde Cessna and his PR stunt. We have to convince our customers, who are probably going to be a bit more critical than the travelling public of 1928, and apply the right loading!