March was a hectic month - with three customized training classes in England and Scotland. 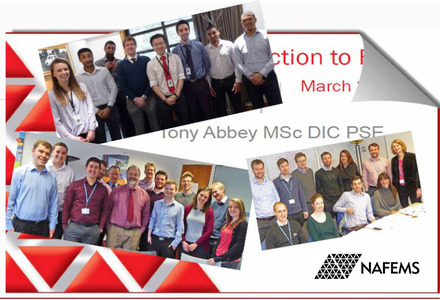 First stop was Atkins Ground Engineering Group in Epsom, with a tailored Dynamics Analysis Course for some of the Geotechnical Engineering Staff..

Next up, Jaguar Land Rover (JLR)  in Gaydon, where Tony taught the final Introduction to FEA for the 2014/15 intake. This is a highly customized course focused on Finite Element Analysis within JLR's Virtual Engineering vision for the future.

The 2015/16 series of courses is already being redesigned to provide more interactive and distance learning material.

The final stop was in Edinburgh where last year's successful Introduction to Finite Element Analysis for Oil and Gas disciplines was repeated for Atkins Energy.

On Linkedin I also posted comments on 2 articles :

All in all a very successful month with some very satisfied customers!

If you would like to see your staff getting the same professional training across a wide variety of Structural or CFD disciplines, email training@nafems.org or check out the NAFEMS Training section.

If you would like to join the debate, join us on the NAFEMS group on linkedin

Until next time,
Regards,
Tony