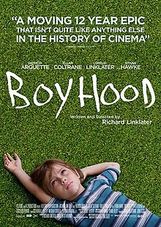 Usually, when a movie is trying to convey the passage of time, say by a flashback to a character’s childhood, a young actor is used that someone, perhaps the casting director, has determined bears some resemblance to the adult actor. “Boyhood” is the story of growing up as seen through the eyes of a child and breaks that mold by shooting over a 12 year period with the same cast. Snapshots of adolescence from road trips and family dinners to birthdays and graduations and all the moments in between become transcendent set to a soundtrack spanning the years from Coldplay's Yellow to Arcade Fire's Deep Blue. “Boyhood” is both a nostalgic time capsule of the recent past and an ode to growing up and parenting.

This movie was a stunning achievement of cinematography and the practice of using different actors for different ages of the same character will forever pale in comparison. Apart from the amazing feat of having all the actors available for a number of weeks each year, the only real problem on the set (that I read about) was when the actor that played the main character’s sister was a teenager: she wanted to have her character killed off. However, that actor was the daughter of the director, who told her to stick with it – and she was glad that she did.

Ultimately, though, that the movie “Boyhood” was filmed over 12 years with the same actors, allowing the audience to really see the kids grow up, hit home for me as it has somewhat parallels to my professional career. You see, I was recently promoted to manager of the aero-thermal department. Not only do I oversee the CFD group, but now also the full vehicle aerodynamic and thermal testing groups. I will say that it has been an interesting few months as I get up to speed on the requirements and duties of a department manager. I am the one who has to manage the various personalities the department, from the call-it-as-I-see-it test guy to the introspective CFD analyst, and then make sure the requirements that our department is responsible for actually get done.

The first thing I did was to meet with the testing technicians as I felt that they would feel the most threatened by a “CFD guy” being manager. Fortunately, I have a fair amount of testing experience and was able to reassure them that, while I still need to learn more about the day-to-day testing activities, I do understand what it takes to run a successful testing program: a solid base of technicians. While I also retained my CFD Technical Expert role (overseeing how we apply CFD to the problems that come up), I have probably run my last CFD model in any real sense. In a certain light, I see the CFD program as something that has “grown up” with me over the last 12-15 years as it developed from a small group running CFD models on 1 CPU to a program that is required for a successful development. Additionally, the old notion that the test guys do not trust CFD is definitely alive and well, but there are things that testing can learn from modeling.

I think it’s mostly just that the test guys think of CFD as this unknown thing and one that can really be made to produce any answer through “tuning.” Nevertheless, now that I am in the position of overseeing both testing and modeling, my goal is to mesh (pun intended) the two disciplines. Test tracking comes immediately to mind as job tracking is very easy for CAE, where submitting jobs on a large cluster through a HPC queuing system lends itself to tracking of all kinds of information, such as project, user, solve time, etc. This, when analyzed properly, can have implications to determine usefulness of CFD. Can this same concept be applied to testing? I think so, but – as usual – the devil is in the details. It is those details that I will be sorting out over the next few months. I’ll try and keep you informed.

What are your thoughts on this? How can we best combine testing and modeling functions? Or anything else for that matter?
-The CAE Guy