The NAFEMS World Congress 2013 was held in Salzburg, Austria in June 2013, and was the only independent, global conference that focuses entirely on simulation and its impact on industry and beyond.

Once again, the World Congress broke records as the single largest independent, international gathering of the engineering analysis community so far. Over 580 attendees from every corner of the globe ensured that the event represented every industry sector, technology area and software solution available.

“Once again, we’ve seen a record turnout at our latest World Congress”, commented NAFEMS CEO Tim Morris. “There are huge strides being made by industry in the adoption of engineering simulation, and the huge attendance at the event underlines the fact that engineering simulation is thriving as an industry sector, despite the on-going financial downturn”

This year, the Congress also hosted the 1st International Conference on Simulation Process & Data Management, which ran alongside the main Congress.

“The enormous interest in SPDM from the industry shows no sign of abating”, said Morris. “The fact that an entire international conference around the subject was so popular and well attended demonstrates that this really is the next big issue for the simulation community and beyond.” 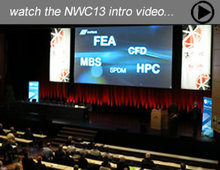