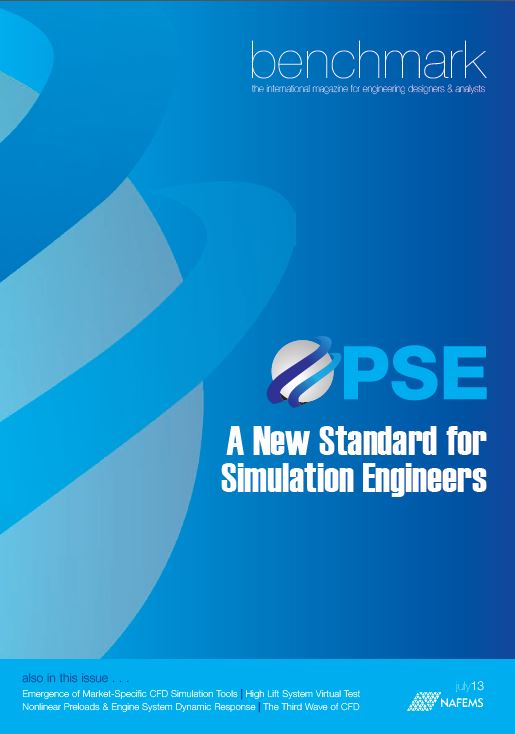 Thirty years since NAFEMS was founded, this year marks the launch of one of the most ambitious products we’ve put together. 2013 sees the advent of the Professional Simulation Engineer, a combination of certification and competency tracking which is set to become the de facto standard in all areas of numerical analysis. A bold claim? Perhaps. But one thing that we consistently hear at NAFEMS is that there is an urgent need for Simulation Engineers of all levels to have a way of demonstrating their skills in a standard, globally accepted way, as well as a requirement from companies and clients to be able to see at a glance that the person doing their analysis is a suitably qualified and experienced person (SQEP).

Through the recent EASIT2 project, these standards and competencies have been developed and put together by a consortium with huge experience in the field, and NAFEMS has been tasked with rolling out this information to the global community, and providing a way for everyone involved to demonstrate their capabilities.

A recent report from Research and Markets has predicted significant growth in the Finite Element Analysis sector alone over the next three years, driven primarily by the developing countries such as India, China, Korea and Brazil. The move of simulation software to “the cloud” (I hate that term!) which we have seen recently from many of the major software vendors (and which many traditional users said would never happen) opens up analysis software to many companies who previously could not justify the upfront capital costs. The global FEA market is changing, and it is changing in line with the way that many other technologies and services are going ‘online’, albeit at different rates and maturities.

As the software becomes more accessible, more and more people will try to use it. More and more users with little or no training will ‘learn’ the packages and assume they then have the skill sets to offer simulation services to anyone who asks for them. Whilst this is encouraging, it could also be dangerous. We, as a community, need to ensure that everyone using analysis and simulation tools has at least some idea what they are doing. And this is where PSE comes into its own. As well as providing competency tracking and certification for experienced analysts, new or novice users can also use PSE in order to work out what they should know, how they can learn it, and how best to put it into practice. In the future, there will be only one way for companies and prospective employers to check someone’s simulation credentials – from their PSE certification.

The launch of PSE came at the recent NAFEMS World Congress, which I’m sure you will have heard by now was the largest and most successful NAFEMS event ever held. Almost 600 people joined us in Salzburg, Austria, which for four days was truly the centre of the analysis universe. A full review of the Congress, and further information on PSE can be found in this edition of benchmark.

The magazine is available for NAFEMS Members to download below. You will need to login above to access.