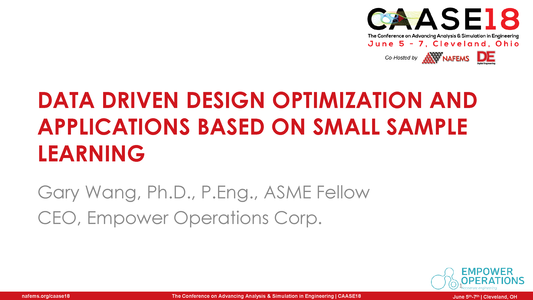 Despite continued progress, simulation-based design optimization still requires lots of iterative simulation calls. Modern simulation models are “invisible” as their function structure is hidden from the users and thus considered black-boxes. They are also computationally expensive and lengthy. Under this context, how to use the smallest number of simulation calls to get to the optimum?

New generation of optimization methods use small samples to deal with this challenge. The goal is to learn from the limited data to achieve the highest efficiency in looking for the best design possible.

This talk will introduce some of the recent technologies from Empower Operations Corp. and its applications to real-world challenges. Derived from the field of metamodel-based design optimization, our methods show clear resemblance to the machine learning methods. This talk will introduce Trust Region-based Mode Pursuing Sampling (TR-MPS) method, and the Optimization on Metamodel-supported Iterative Decomposition (OMID) method.

These methods have been successfully applied to a General Motor assembly process planning problem. In this project, the goal is to automatically optimize the locators’ positions for the auto body assembly. A third-party commercial dimensional analysis software tool, referred to as “Software D” to conceal its actual name, is used to simulate the assembly process. The final assembly quality measures are obtained from Software D for different configurations of the locators during the optimization process. During the optimization process, the algorithm iteratively nominates new sets of locator configurations that are subsequently simulated in Software D. The overall assembly variation (i.e. the optimization objective function) is then returned to the optimizer, which suggests new configurations (design variable values).
In the context of simulation-based design, usually a problem with more than ten dimensions (d>10) is considered as a high-dimensional problem. On the other hand, the objective function (i.e., variances at key product characteristic points on the final assembly) of the optimization problem is calculated via Monte-Carlo simulation in Software D. This makes the optimization problem computationally expensive, which is often considered as an expensive black-box. Thus, in this project, the optimization involves High-dimensional, Expensive, and Black-box (HEB) functions, which is very challenging from both theoretical and practical perspectives. Moreover, the parts often have complex geometries with curved edges and three dimensional features. Therefore, it is difficult to define the possible position of locators as a continuous planar space. To overcome this difficulty, a discrete set of feasible locations is defined for each part. Therefore, the combination of locations of entities (on each part) defines the search space. This means the problem is combinatorial in nature, which makes it even more difficult to optimize. The total number of possible solutions reaches to the order of 10 to the power of 172. Furthermore, it is also found that since the objective function involves the variances at more than 200 key product characteristic (KPC) points, the optimization is essentially a multi-objective problem. By summing all the objectives into one function, the problem is turned into a single-objective but multimodal function. It is found that the objective function has many local optima and is a “choppy” function, which increases the difficulty for optimization. In summary, this problem is HEB, combinatorial, and multimodal, which represents a world-class difficult problem to solve.

Using our approach, the assembly quality has been improved by 65% with only 10,000 sample points. Some other interesting things have been learned as well from the project.