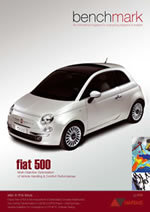 Yes, this is benchmark magazine, just in case you were wondering what had happened. We’ve had a much-needed redesign for this issue, in the spirit of NAFEMS entering its second quarter-century, and we think it’s a change for the better. And as if to emphasise the move forward, we’d like to hear your thoughts on anything and everything surrounding the articles in this issue, and simulation and analysis in general – details of how to do this are below, including our newly launched “social networking” points of contact (now this IS all getting far too modern!).

As well as a cosmetic overhaul, this issue sees the launch of several new regular columns, including to the editor,www dot and I Want One. Further regular features will be introduced over the next few issues, and we’d like to hear what you think of them.

So, as benchmark moves forward, as does NAFEMS, what landscape do we find before us? Certainly, things look more than a little different going forward than they did say 18- 24 months ago. The mechanics and implications of the global recession have been covered at length, and in more knowledgeable terms, elsewhere, but it would be foolhardy to the analysis community not to consider how such a depressed economy affects our industry.

In bullish terms, it would be quite simple for NAFEMS to trumpet the correct and informed use of simulation technology as a way for companies to actually “reign-in” expenditure and make their products and processes more profitable and efficient. The proper, efficient and informed usage of analysis and simulation tools by qualified and educated specialists can most definitely bring savings in both economic and efficiency terms. But when starting from a point where expenditure is being cut and budgets are being squeezed ever tighter, is this a realistic message to send out?

Simply put, yes it is. Ultimately, simulation helps save companies money by making the design process more efficient and effective. When manufacturing output is being reduced, as is happening already, there is a window of opportunity for companies to continue to invest in simulation in order to increase their competitiveness, which should allow them to emerge from the recession in a stronger state in a market which will probably have fewer competitors...

Independent research which NAFEMS has been involved in suggests that best-in-class companies are often those that make the greatest use of simulation. In broader terms, we can therefore conclude that those companies whose use of simulation is efficient and well managed will have an even stronger competitive edge over their rivals. It is not simply enough to use simulation on an “ad-hoc” basis in a closed environment – in order to get the full benefits, companies must engage with the wider community to keep abreast of best-practice methods, and ensure that their analysts are involved in a strong program of continuous professional development.

In closing, I recently came across a company, who shall remain nameless, whose website proclaimed that their CAD software was “as simple to use as Microsoft Paint”- the implication being that anyone could use it, with the bare minimum of training or previous knowledge. Now, whilst I’m sure that the same claims would not be made by any of the vendors of FEA or CFD packages, we all know that analysis software is becoming ever-more user-friendly and “all encompassing”. There is a very real danger in giving companies engaging in analysis for the first time an over-simplistic view of both the software and the methods.

NAFEMS mission statement, “To promote the safe and reliable use of finite element and related technology” has never been more relevant. Whilst analysis may correctly be seen as a way to increase efficiency, and ultimately profit margins, it must not be forgotten that education, training, awareness and professional development are vital to each and every company and individual involved in analysis and simulation.

As ever, your comments and input are extremely welcome on this, or any other issue you feel is relevant to the community. Get in touch using the details below. Enjoy the magazine!