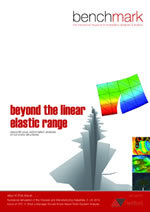 As we look back over the past 12 months and quickly decide to consign the year to the dustbin, it’s time to put our best foot forward into the New Year. As a Scotsman, Hogmanay (to give it its proper title) is usually the highlight of the holidays. As I’m writing this in mid-December however, I’m going to assume that as you read, my hangover has subsided (at least a little), and that we’re all ready to launch into the new decade. And what better way to start the year than with lists.

We’re obsessed with lists. As a species, we love them – we can’t live without them, and new year brings the dawn of the resolution list, which usually contains a resolution to get “more organised” i.e. create lots of different lists. And this issue of benchmark is no different. As well as the “CAE Manifesto” from our resident CAE Guy, we also take a look at what managers should really know about FEA. In addition, the new “Icons of CFD” series kicks-off with a profile of one of CFD’s most influential figures, Dr Brian Spalding, giving an interesting overview of his contribution to what many of us work with each day.

Also included in this issue is news of the upcoming NAFEMS UK Conference, to be held in June 2010 in Oxford. In recent years, these regional conferences have gone from strength to strength, complimenting the biennial World Congress with a smaller-scale, more localised event, allowing those on a limited travel budget (i.e. most of us..) to participate in a uniquely independent simulation conference. We hope to meet many of our UK readers at the 2010 event, and over the coming months, NAFEMS will announce plans for similar regional conferences around the globe.

I was reminded recently of the way in which topics and trends seem to have a mind of their own in the analysis community. In the first part of this year, NAFEMS will be holding several events focussing on Composites. This is a topic that was noted as being of particular interest to attendees at NAFEMS World Congress 2009, and since the event, discussion across our regional steering groups has resulted in proposals and plans for no fewer than three individual events on this area.

To me, this is the mark of a true “community”. Whilst NAFEMS members, and benchmark readers, are spread across the globe and within a myriad of industries, there always seems to be a common area in which many of these individuals and companies develop an interest, and require a training need to be filled.

This is what NAFEMS is all about – listening to our members, as well as the wider community, and providing them with the training they feel is necessary in the areas they have most interest in.

Articles are available for NAFEMS Members to download below . You will need to login above to access these files.