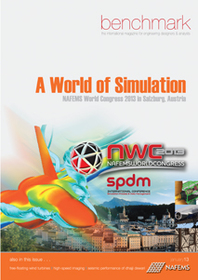 Just when you think that things can’t get any better or bigger, the engineering analysis community turns ‘round and surprises you once again. Our 2011 World Congress in Boston was widely hailed as the biggest and best NAFEMS event in our history, and in planning for the 2013 Salzburg version, the biggest problem we thought we would have would be replicating or indeed bettering the event.

Without being too premature, it looks like we needn’t have worried. The call for papers for the Congress closed in November, and the number and quality of abstracts received has topped even our wildest expectations. Over 350 abstracts were received before the deadline, more than double the response to the last event. In the current economic climate, it’s heartening to see that interest in NAFEMS as an independent authority on engineering analysis and simulation has never been stronger. We’re gearing up for what is looking like a massive event, and I hope that as many of you as possible will be able to attend what will be four days of cutting-edge presentations, workshops, training courses and discussion with the top industry and academic experts in the field. You can find out more, and view all of the accepted abstracts, at www.nafems.org/congress

In the last issue, we launched our benchmark readers survey,and we’ve had a great response so far. You can still give us your feedback at any time by emailing me or completing the survey at www.nafems.org/survey. We’ve already begun to act on some of your feedback in this issue – one of the main points being made was that you have an appetite for more “in-depth” technical articles in the magazine, and this issue sees us weighing-in with some more ‘meaty’ articles to get your teeth into.

The other interesting aspect is that there is overwhelming support to continue receiving a “hard-copy” of the magazine in the post. In this increasingly digital environment, we had thought that perhaps our readers would be tired of the old “paper and ink” version of the magazine, and would be happier with a downloadable version. This doesn’t seem to be the case, with most of you saying that whilst a digital copy is useful, you still enjoy receiving the printed version. NAFEMS members do have access to download PDF versions of the magazine from our website (if you’re unsure how to do this,email info@nafems.org), but we’re pleased to see that you still want the ‘physical’ copy in your hands. We’ll be reviewing the survey results in more detail, and will continue to act on your feedback to make sure we are providing you with the information you want, when you want it, and the format that suits you best.

P.S. It turns out some of you DO read the editorial – who would have thought it? Responses from as far and wide as Russia, South Africa,Australia and the USA gave me warm glow inside. That prize I spoke of in the last issue has been sent to the winner, and all is right in the world :)

The magazine is available for NAFEMS Members to download below. You will need to login above to access.