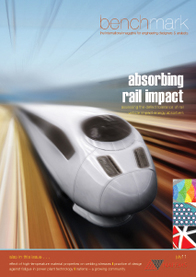 It has been a significant few months for NAFEMS since the last issue of benchmark. As you will probably know, our biennial world congress took place in Boston in May, and not only was it the biggest and most well attended event in the history of NAFEMS, but it has also generated some excellent feedback from all those who attended. The by now traditional mix of excellent technical content coupled with industry-leading keynote presentations and numerous networking and social events was as evident as ever, and the 360 attendees took full advantage of everything the event provided. A full review of the congress is included in this issue, as well as articles based on the winners of the ‘best paper’ awards at the event. A big thanks to all of our sponsors, exhibitors and delegates who helped make the event a memorable one for all concerned.

Another significant step in the evolution of NAFEMS has also been reached. In the past month, the membership of the organisation has surpassed 1000 companies and institutions, a target we have been aiming at for quite some time.  Just to place that into context – member companies typically have at least twenty, or in some cases many times that number, analysts and interested parties taking advantage of the benefits of their NAFEMS membership, so the community itself represents a very significant ‘chunk’ of the global simulation ‘family’.

I think it’s no coincidence that, in a time where the world is only just recovering from global recession, membership of NAFEMS has actually increased to unprecedented levels. In previous editorials, we’ve discussed that very phenomenon, and how being part of an organisation such as NAFEMS can become vital when trying to use best-practice, safety and efficiency as a ‘USP’ to differentiate your company from your competitors. It’s a message that has obviously been taken on-board, and the technical working groups, regional steering groups, board of directors and staff at NAFEMS have been working tirelessly over the past few years to ensure that membership retains its status as an integral ‘tool’ for each and every member of the community.

But please remember – that’s exactly what NAFEMS is: a community. It’s easy to lose sight of that, especially when we’re growing , holding larger and more successful events, and producing more publications and training to meet the needs of everyone involved. NAFEMS is non-profit, vendor-neutral, and exists purely to serve the needs of engineering analysts like you. We’re ‘your’ organisation – one community with one vision, which moves forward only if people like you want it to.

So, the message remains the same – get involved. Whether it be through completing one of our online surveys, e-mailing your comments on an article within benchmark to me, offering to sit on one of our working groups, or indeed proposing a technology area you’d like to contribute to.

We want you to be an active part of this global community, and help us push forward to the next milestone.