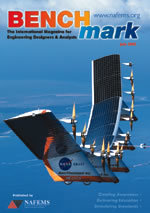 After nearly 8 years as Chief Executive at NAFEMS, I have decided to seek new challenges. This will be my 31st and final issue of BENCHmark. During that time the membership has grown substantially increasing by almost fourfold, matched by a steady increase in the investment in membership deliverables. In the financial year just ended we invested in excess of £100,000 on membership expenditure, a figure which excludes the cost of running an active seminar program and bi-annual world congress.

The NAFEMS Council has appointed Paul Newton as a part-time interim Managing Director. Paul will run the organization in the interim period while assisting Council to recruit a new Chief Executive. Paul has been a Council member for several years, and has worked very closely with me over the last few years, with specific responsibility for finance and administration. Prior to that he was Managing Director of MSC’s UK operation. So I feel comfortable that the organisation will be in a safe pair of hands.

Time for Reflection
When I first started producing BENCHmark I used to think the purpose of the editorial was to push NAFEMS products and services. Along the way I was introduced to Ron Kohl of Machine Design by Paul Dvorak. Since then Paul and I have met many times at conferences and become good friends.I was to learn that Ron Kohl’s editorials,which featured strong personal views and individual perspectives, had something of a cult following. Freedom of expression, liberating at a personal level,is, however, an ideal vehicle for stimulating debate. In many ways it is what NAFEMS stands for, voicing opinions, concerns and finding a consensus for solutions and agreeing best practice.

Enthusiasm
I would like to acknowledge the support and encouragement I received from many of the people that were involved with NAFEMS and that provided the inspiration to achieve our goals and to strive for positive change. There is undoubtedly a common language that everyone understands, and that is “The Language of Enthusiasm”. There has been and continues to be much enthusiasm for what NAFEMS can bring to the Analysis Community. When you communicate that clearly, then collectively people conspire to make it happen.

The Journey
The great Scottish author Robert Louis Stevenson, is reputed to have said, “It is better to travel in hope than to arrive”. Having made my decision to leave NAFEMS I can share something of that sentiment, for along the way I have been privileged to work with a great many articulate and technically gifted individuals. I have made some lasting friendships and had tremendous fun.

At a personal level I have acquired new qualifications and skills. I have also been fortunate enough to realise some of my personal ambitions and dreams, taking up for example motor sport and attending a number of night classes from creative writing to XML programming. Life has certainly never been dull. The extensive travel for NAFEMS also gave me the opportunity to indulge in a favourite pastime of reading.

Parting Shot
In the UK we have a well known radio programme called “Desert Island Discs”.Famous personalities who become hypothetical shipwrecks, are asked to chose ten records they would take with them along with two books and a luxury item. One of my books would have to be by my favourite motoring author LJKSetright, who once said, “ If language benot accorded priority over subject, then the subject can have no reliable priority at all”. I guess that sums up how I feel about analysis, “if you don’t put continuous professional development at the top of your agenda then analysis can have no reliable basis at all”. So I hope that you wouldn’t consider BENCHmark and NAFEMS to be luxury items, rather necessities for all responsible engineering organisations. Which in a way takes mefull circle to where I came in , with arguably only one “edvertorial” for NAFEMS and its services.