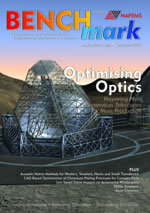 One of the early-day pioneers of NAFEMS visited our East Kilbride offices recently. During our discussions he mischievously suggested that all the problems that NAFEMS had been set up to deal with had now been solved.

Perhaps he has a point? Users of any mainstream software package no longer spend much time worrying if the element formulation is correct, or if the software has been verified to run on their precise combination of hardware and operating system.

In a similar vein, another “wise man” who has spent much of his career involved with Finite Element Analysis explained how he felt that FEA technology has now become mature, and almost all the major leaps in capabilities have already all but been accomplished.

Whilst acknowledging that many of the problems of years past have indeed been solved, and that the use of Finite Element Analysis and Computational Fluid Dynamics in some sectors has achieved a degree of maturity, I cannot agree with either of the points of view that I had heard.

Is it yet possible to take a CAD model, in a few simple steps define how the item will be used, and then expect a reliable answer about whether it is fit for its intended purpose? For some specific applications with customised software, and for some single components, the answer is (arguably) a tentative “yes”. For a general assembly of components, the argument becomes far more difficult. (And most engineers that any such analysis requires a knowledgeable and suitable educated user). Can complete systems be assessed in this way? What about accurate predictions of real failure modes? Or designs which are truly “optimised” taking account of the myriad of issues influencing practical designs? And, underpinning all of this, how can engineers be really confident that their predictions represent reality?

No, I would have to say that whilst a number of chapters have now been completed in the evolution of Finite Element Analysis, Computational Fluid Dynamics and similar techniques, I for one don’t believe that the rate of progress has even begun to slow down, yet alone reached a plateau where the majority of problems have been answered. As an industry we are still in our youthful phase, with much still to learn, experience to gain and questions still to be answered. In amongst this, the role for NAFEMS must surely be crystal clear.