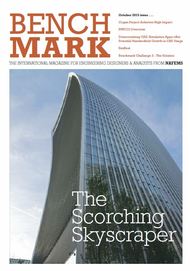 This year has been a massive one for NAFEMS. Our largest ever North American event, the NAFEMS World Congress 2015, took place in San Diego in June, welcoming over 500 participants from around the globe to the only independent, international event focussed solely on engineering analysis and simulation. Attendees had access to three days of industry-leading presentations, workshops, training courses, and an exhibition area representing almost every major software vendor on the market. Feedback from the event has been outstanding, and a brief summary can be found in this issue of benchmark.

But, like time, NAFEMS never stands still. We are already focussing on 2016 and our regional conference program, which will see no fewer than five conferences take place in various parts of the world all with one common goal – to bring best practise and state-of-the-art in engineering analysis to as broad a community as possible. A full breakdown of the event program can be found at nafems.org/2016, and each conference currently has an open call for presentations, so this is your chance to get involved.

This issue of benchmark contains a number of interesting articles. Our cover story looks at a phenomenon which made front-page headlines in the UK – a car melting due to the sun reflecting off of a nearby building. The “walkie-talkie” building in London had already made headlines due to it’s innovative design, but no-one had predicted that it could take on a life of its own, or a career in vehicle modification…

Also in this issue, an opinion piece from Bruce Jenkins from Ora Research on how simulation ‘apps’ are on the verge of massively increasing CAE uptake. Inspired by our current “Simulation 20/20: The Next 5 Years” webinar series, this is a fascinating insight into where the future may be heading.

As we always say, NAFEMS is your organisation, and benchmark is your magazine.

Get in touch with any comments you may have and any content you would like to see included.