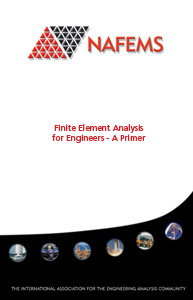 NAFEMS has produced a steady stream of publications intended for the finite element community since its inception in the mid-1980’s. The publications cover many aspects relevant to the safe and proper practice of finite element analysis including theory, practice, benchmarks, quality assurance procedures and specific project reports. In the late 1980’s, NAFEMS published a book entitled “A Finite Element Primer” and this has been a key component of the literature ever since. However, advances in finite element technology, software availability and other user requirements have indicated that a major revision of primer-level material would be desirable, particularly for the emerging generation of young engineers and scientists. The current book is a complete and independent rewrite intended to address such needs.

The book is intended to benefit graduate engineers embarking on a career in industry and scientists who require a general background knowledge of the finite element method in order to perform detailed analysis or conduct related research. It is typically aimed at the level of a graduate with one year of on-the-job experience and at an early stage of career development, who is embarking on analysis in an industrial environment, or for analysts who have attended software vendor courses and require further education in the method. For many, however, the opportunity to study the method in detail will be limited due to other professional obligations and so they will have to be limited to some optimum level of material. This book is therefore aimed at such, giving a general and embracing overview of the finite element method. Emphasis is for more description and less mathematical detail than that given in traditional finite element texts, many of which give theoretical details way beyond most users’ requirements. This book complements many existing NAFEMS publications, which are written with similar objectives in mind and to which reference can be made for more specific information.

The scope of this book covers the finite element method applied to structural mechanics in solids (as opposed to fluids), with emphasis on static linear elastic stress analysis. Most of the principles of finite element analysis, implications to software use particularly in the CAD environment, and management and other issues are well represented within this scope. More complicated issues are introduced by chapters covering non-linear behaviour.

In most of the chapters, the fundamentals behind the various finite element developments are discussed, usually involving mathematical derivations. It is possible of course to omit such sections and simply state those equations which are important in the finite element context. However, the justification for including these derivations is to show how the necessary assumptions and restrictions affect the various steps. The progression through the mathematical developments should, at least, be appreciated if not fully understood. All this helps in judging errors, realising the need to design appropriate idealisations, and in understanding the user manuals.

It is assumed that the reader has a basic understanding of applied mechanics and basic mathematical processes such as differentiation and integration. Material science considerations such as the validity of material constitutive laws are beyond the scope of this book. Specific reference to commercial finite element codes is avoided since a neutral stance has to be taken here, although examples and figures referring to such are included when necessary.

Because of the breadth of the subject that this book is required to cover, it is divided into three parts. The first part covers the basis of the finite element method, with particular emphasis on its application in stress analysis. The second part considers practical aspects of the method, such as meshing and testing. Finally, the third part covers further applications of the finite element method, extending the basic concepts described in Part 1 to thermal, dynamic and non-linear behaviour.

Save 20% on this book when purchased with:

A Designer’s Guide to Simulation with Finite Element Analysis

Knowledge Base - Don't Forget the Basics

This publication replaces the original "A Finite Element Primer" (FEP), which was originally published by NAFEMS in 1986.