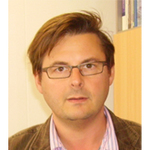 Francisco Chinesta is currently full Professor of computational physics at ENSAM ParisTech (Paris, France). He was (2008-2012) AIRBUS Group chair professor He is honorary fellow of the “Institut Universitaire de France”, Fellow of the Spanish Royal Academy of Engineering. He received many scientific awards in four different fields: bio-engineering, material forming processes, rheology, and computational mechanics. He is author of 300 papers in peer-reviewed international journals and more than 600 contributions in conferences.

He is president of the French association of computational mechanics (CSMA) and director of the CNRS research group on model order reduction techniques in engineering sciences. He is editor and associate editor of many journals. Since 2013 he has been ESI chair professor on advanced modeling and simulation of materials, structures, processes and systems, and he is the president of ESI Group Scientific Committee.

A new paradigm for simulation-and-data-based engineering as applied to materials, processes, structures, and systems.

In the previous industrial revolution, virtual twins emulating a physical system were considered as the major protagonists of simulation-based engineering. This type of twin was usually based on numerical, yet static, models that were used, often separately and independently, in designing, manufacturing and testing complex systems and their components. They were, however, not expected to accommodate or assimilate data. The reason is that the characteristic time of standard simulations was, and still is even today, not compatible with the real-time-response required to perform a meaningful intervention or control of an active process.
The next generation of twins, digital twin, allows real-time decision-making by using powerful data analytics, machine learning and artificial intelligence on the abundant collected data. Thus, predictive and operative maintenance, and data-based control can be possible. However, creating a data-based model from scratch is expensive and sometimes requires too much data that can be difficult or even impossible to collect. Hence, a hybrid paradigm seems more pertinent - a paradigm that allows also for predictions from a physics-based model, whose noticed deviations from the physical measurements provides an opportunity to learn on-the-fly. The latter can be defined as the “deviation data-based model”, which represents identification issues or an epistemic ignorance inherent in the considered physics-based model. In other words, it is indeed a new paradigm of “data-based engineering and engineered data”.

Though the hybrid approach, combining two models – one based on the physics and the other on the prediction/measurement deviation – seems the most appealing modeling framework. The challenge remains within the “computation time”!

In order to perform predictions in real time, models based on the physics must be calibrated and solved under the stringent real-time constraint, also the data-based model should be learned online in real-time.  In both cases, Model Order Reduction (MOR) techniques open new possibilities for more efficient simulations and modeling enabling real-time feedbacks. The Proper Generalized Decomposition (PGD) method, is one of these well-established MOR techniques that consists of calculating offline a parametric model containing the solutions of all possible scenarios – while circumventing the combinatorial exposition. It enables real-time simulation, optimization, inverse and sensitivity analyses, uncertainty propagation and simulation-based control.

The Dynamic Data Driven Applications Systems (DDDAS) based on the hybrid paradigm outlined above constitutes a new era in simulation-based-and-data engineering sciences. It is applicable across materials, processes, structures, and complex systems – bridging design, manufacturing, and the systems in-operation throughout their lives, enhancing their performances and lifecycle.