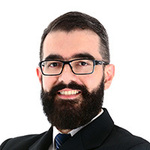 Rodrigo is a Senior Engineer in the department of Digital Engineering Systems and Technology Development at EMBRAER S.A. Rodrigo holds degrees in Mechanical Engineering from the Federal University of Santa Catarina (UFSC) in Brazil, an MBA from Fundação Getúlio Vargas (FGV-EAESP) with specialization in Marketing Management and an M.Sc. from INPE, the Brazilian Space Research Institute, where he proposed an SPDM environment for space systems.

He began his career at EMBRAER in 1999, when he joined the Loads Engineering team, where he has worked with dynamic landing and taxiing simulations, as well as with the management of aircraft certification activities. He participated in the development of the successful EMBRAER E-Jets aircraft family: EMBRAER 170, 175, 190 and 195. In 2005, Rodrigo joined the Digital Engineering Systems and Technology Development team and since then, has worked with the implementation and administration of new CAE, PLM and SPDM solutions at EMBRAER. He was responsible for the first SPDM implementation at EMBRAER.

Rodrigo joined the NAFEMS Simulation Data Management Working Group (SDMWG) in 2010. Since then, he has participated in many NAFEMS conferences, presenting his experience with SPDM at EMBRAER. He has been a member of NAFEMS Americas Steering Committee (NASC) since 2012. Rodrigo currently resides in São José dos Campos, state of São Paulo, Brazil.

Applications of SPDM in Aircraft Structural Analysis at Embraer

Aircraft structural analysis is a process that involves several engineers working concurrently to analyze in detail all structural elements of an airframe, as well as the behavior of the aircraft structure as a whole. The airframe has to be decomposed in its major components such as fuselage sections, wings and control surfaces to allow the distribution of the analyzes among the engineers. Finite element models (FEM) are created for each major component and used in the analyzes. The major components, such as the wing, are even further decomposed into its constituent parts such as the spars, ribs, and stringers, which are modeled in detail using higher fidelity FEMs. It's a great challenge to manage the evolution of the structural modifications that arise in consequence of these analyzes. Design changes due to the results obtained using the higher fidelity FEMs have to be transferred to the lower fidelity FEMs and an assembly of the whole airframe FEM needs to be created and analyzed, using the correct versions of all the FEMs of the major parts.

This presentation shows the results of the solution implemented by Embraer to overcome these challenges, by using the Simulation Process and Data Management (SPDM) technology. Embraer embarked on the SPDM journey eight years ago and during past years has matured various aspects of their SPDM implementation. The presentation will cover applications of the SPDM system in the area of structural analysis at Embraer with a couple of representative business processes as examples, including the rapid generation and evaluation of aircraft assemblies and the consolidation and standardization of various simulation methods across the organization, by making those available over the SPDM platform. Key enablers for increasing simulation throughput and data traceability at Embraer are the topics discussed. In addition, the approach that Embraer took for ongoing additions of new business processes to the SPDM system is presented.