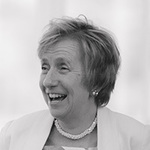 Vicky had a long and successful career in the UK Met Office in a variety of roles - as a climate science researcher, programme manager, communicator of publicly important science and partnership developer. She is now building a portfolio career focussing on issues that she cares about and where she can make a tangible difference. These issues include: protecting and enhancing the environment, improving scientific literacy in decision making (noting that even the science minister in the UK is a historian) and improved access to STEM careers.

Vicky joined the Met Office in the 1980s and later obtained her PhD in Meteorology from the University of Reading. In the 1990s she led teams in stratospheric research (working on the ozone hole) and climate model development. In particular, she led the development of Met Office Hadley Centre models used in IPCC 3rd and 4th Assessment Reports and for the UK Climate Projections released in 2009 (UKCP09), and still in use today.
In 2002 she became a senior manager of the climate research programme for various government departments - MoD, Defra and DECC, ensuring that the Met Office provided high-quality relevant climate change science to underpin policy development. For example, she led the Met Office contribution of science to the Stern Review on the economics of climate change and worked on improving communication of climate change science.

In her most recent full-time role she was responsible for developing opportunities to exploit Met Office science and technology capabilities, often in partnership, to improve services to government. She had a wide remit with interests in the impact of weather and climate on environmental and financial risk, satellite applications, hydrology, transport and the digital economy. She worked on partnerships in Scotland, Wales and the US as well as advisory roles on environmental change.

Achievements and challenges in weather and climate modelling

Advances in weather and climate modelling have been driven as much by technological development as by improvements in weather and climate science. The most notable of these are the rapid increases in supercomputer power and improvements in Earth observations from space. Rapidly improving modelling capability enabled by this technology has led to 3-day weather forecasts today being as accurate as 1-day forecasts were 20 years ago. At the other end of the scale ambitious detailed climate change information has now been provided for the next 100 years for the UK, combining whether resolving detail and multi-model ensembles to provide risk-based information.

The weather and climate sector faces significant challenges and opportunities from both hardware and software developments. Moore’s law appears to be breaking down for the next generation of supercomputers. The sector faces significant challenges in redesigning codes to work on GPUs and is starting to consider the implications of new technologies such as quantum or biological computers. Data handling and analysis is a strong focus as we generate ever-increasing amounts of data and there is more demand for the information that it provides. On the other hand there are new exciting opportunities arising from the development of small satellites and new local measurements from the Internet of things. The sector is already a sophisticated user of machine learning, in particular for assimilating data into complex weather models, but there are likely to be further opportunities from tapping into the rapid development of new techniques in other sectors. Against this backdrop, the fundamental challenges of modelling weather and climate remain despite all the improvements – these include the modelling of convection and clouds, which are important both in weather forecasting and climate change.

Communication of weather forecasts and climate projections is as challenging as the science. It is important that users understand the accuracy and utility of what they are being given to build trust and understanding of their limitations. These issues are common to many engineering sectors, but few have the scrutiny and importance of climate change.