Speed is of the Essence - Rising to the Challenge of Multiphysics 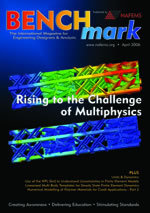 The cover image shows the results of an FSI study taken from the upcoming publication “Why Do Multiphysics?”. This shows the deformations and stresses in a Sulzer SMB mixer by coupling the two commercial codes STAR-CD and PERMAS through the coupling library MpCCI.

It seems that everyone involved with the use of simulation has their own reference point relating to the rapid advances that have been made in the development of computer hardware. For me, it might be the recollection of the excitement which greeted the purchase of a 16KB memory extension for my first computer, or to cringe with horror at the meshes I was forced to use in the early stages of my career. In the twenty years or so since NAFEMS was created, the increases in affordable computing power have been truly awesome.

When I was working through the findings from the FENET project recently, it seemed that hardware improvements no longer jumped out as a high priority item for future developments. But is this just because we assume that hardware improvements will continue at their previous rapid pace? We certainly shouldn’t forget that computing capabilities are still limiting many of our endeavours to unleash the full potential of engineering simulation. For example, during the 2005 World Congress Lee Margetts spoke about the benefits that could be obtained if “real-time” FEA was available. One application would be to support activities like Virtual Surgery for the training of surgeons and the development of new surgical procedures. This is just one example. In point of fact, real-time simulation has a host of worthy potential applications.

Within this issue of BENCHmark we have two articles discussing areas where hardware issues come to the surface. Firstly, an article from the UK’s National Physical Laboratory which talks about the novel techniques it is using to deal with the gargantuan computing requirements that can result once engineers start to take due account of uncertainty in parameters such as loads, material properties and geometry. Secondly, an article from Laurence Marks describing the continuing emergence of multiphysics applications into the industrial arena.

These are but two of the examples of many areas in which, without the continued drive for further quantum leaps in affordable computing power, simulation engineers are going to be thwarted in their efforts to deliver their vision of the future.