It's All About Opinions... 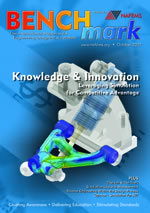 Starting with this issue of BENCHmark, we’re looking to introduce an extra dimension to the magazine by including a number of "opinion" articles where members of the simulation community share their views with us.

In this issue, Rod Dreisbach from Boeing (and chair of the NAFEMS North America Steering Group ) reiterates the observations that he shared with delegates at the 2007 World Congress on how simulation should be used to gain maximum business benefit.

In addition, Peter Bartholomew (co-chair of the CAD/CAE Working Group ) summarises the key issues that have been debated by his group relating to CAE to CAD feedback.

Lastly, entering into the debate on how non-expert users and designers can access simulation to truly drive the design, John Bartle - as a representative of the CAD delegation - shares his opinion with us.

Looking ahead, we’re also delighted that we will be introducing "The CAE Guy" to the BENCHmark readership in the January issue. I’m confident that his observations and commentary are going to provide an entertaining interlude.

Mixing with others from the simulation community is an essential ingredient in the NAFEMS mix. Time and again we’re told how this is what people want to have: meeting others and picking up nuggets of knowledge, guidance and advice from experts, but also making contacts, and hearing informally about what is going on in our industry. Traditionally, this has been achieved through face-to-face meetings at conferences and seminars.

As travel is becoming more difficult to justify, and as communication technology drives forwards, NAFEMS has recently introduced a series of webinars to complement our traditional seminar programme. More recently still, we’ve started to roll out the NICC communication portal to facilitate better interaction between committee members.

In addition, we feel that BENCHmark also has a role to play in furthering the exchange of views and opinions between the various constituents of the NAFEMS community.

By bringing in these features with a new flavour, we are aiming to introduce a new thread to the content of the magazine. We hope that you approve - if you do, or even if you don’t, please do let us know!