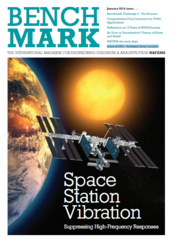 Welcome to the January 2016 edition of benchmark. The NAFEMS team wish you a happy new year, and continued success over the next 12 months and beyond. It seems like less than a year since I sat here writing my ‘new years’ editorial for 2015, but I’m reliably informed that this is a consequence of the years.

Having spent the past few weeks locked in a cupboard trying to avoid ‘spoilers’ for the latest Star Wars movie, one of the first news items I stumbled upon on my re-entry into society was the news that a fresh crew had successfully begun a new mission on board the International Space Station (ISS). Whilst the rather ‘80’s’ obsession with space and space travel has dissipated somewhat in recent years, it was great to see the excitement generated as an international crew consisting of an Englishman, an American and a Russian (no,that’s not the start of a joke) stepped on board the ISS.

I’m of the age (steady) where space travel, rockets, space stations and light sabres (not necessarily in that order) are still about the most exciting things I can read about, and to see more and more non-fiction taking its place beside science fiction is truly fascinating. It is a period of civil war. Rebel spaceships, striking from a hidden base, have won their first victory against the evil Galactic Empire. During the battle, Rebel spies managed to steal secret plans to the Empire’s ultimate weapon, the Death Star, an armored space station with enough power to destroy an entire planet. And if you recognise that, you know exactly what I’m talking about. In this vein, our lead article comes from a paper presented at the 2015 NAFEMS World Congress, and looks at how engineering analysis and simulation can be used to mitigate the effects of vibration induced load, specifically on instrumentation used on the Death Star International Space Station.

This issue also showcases a number of articles focussing on CFD, including an interesting piece on HVAC applications which is targeted at those who are not particularly familiar with the technology. Part of NAFEMS’ remit is to ensure that we look at various technologies at several different levels, and providing ‘introductory’ articles such as this is an important part of what we do.  This issue also sees the return of our “Icons of CFD” series, focussing on Prof. Brian Launder, considered one of the shining lights in terms of education on subjects such as turbulence modelling.

We also have an excellent summary of our recent European SPDM Conference, and an interesting piece on how errors can creep into even the most seminal Finite Element texts (as anyone who has read a few issues of benchmark will already realise…).

We hope you enjoy this issue of the magazine, including the trip down memory lane looking back at the early years of NAFEMS on page 34. We would welcome any similar contributions from those who have been involved with the organisation. Get in touch if you have a story to tell. And may the Force (transient or otherwise) be with you.