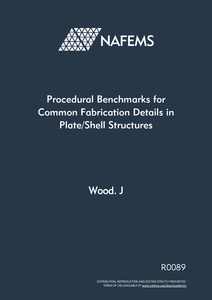 This report, presents outcomes from the Education and Dissemination Workshops held at Noordwijk and Palma on October 2003 and March 2004 respectively. The results from a ‘round-robin’ exercise, completed as part of this activity, are also documented. These workshops and the ‘round-robin’, examined the procedures used in various industry sectors for the modelling and assessment of common fabrication details in plate/shell construction. The primary aim of this exercise was to examine "best practice" in modelling and assessing such detail (with general shell elements) and to disseminate this to the FENET membership and beyond. However, the ‘round-robin’ was seem as an excellent opportunity to examine such practice and to observe resulting educational and quality assurance related issues.

It was anticipated that the unique forum provided by FENET would provide an excellent basis for these studies. As part of this work package, three ‘procedural benchmarks’ were developed to reflect some of the modelling issues relevant to fabricated structures. These benchmarks and selected reference solutions, will provide a worthwhile educational resource. The benchmarks also formed the basis of the ‘round robin’ exercise. While the benchmarks have many of the characteristics of traditional benchmarks, they differ in that they are designed to focus on some of the modelling issues that analysts are faced with and the various procedures adopted in the analysis and assessment process.

In the first two benchmarks about half of the respondents provided results which suggested that they had made modelling errors. In the third example, only two out of ten respondents realised that this is a nonlinear geometric problem. Whilst some contributions were no-doubt completed under time pressure, it can be argued that this is a reflection of the everyday industrial environment for many engineers. The resulting levels of human error and lack of results checking, for what some might regard as simple case studies, must be of wider interest and concern. The general spread of results arising from the different modelling and assessment strategies should also be of interest. The outcomes certainly confirm the ongoing role that organisations such as NAFEMS have, in ensuring quality and promoting the education and development of analysts and engineers. Hopefully the educational and quality implications from the study will provide some impetus to general activity in this area. It is interesting to reflect on the fact that the same exercise and same general conclusions, could probably have been made 30 years ago.